Peter, by the girls

I made this, my first video, as an assignment for a class with filmmaker Ken Jacobs. Shot on VHS in 1995, it looks pretty ragged, but I love that I have it just the same.
Posted by Sarah at 2:05 PM No comments: 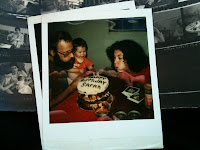 My parent's relationship disolved shortly after this photo was taken at my 1st birthday. I treasure this image as proof that although they went on to lead separate lives, I came into this world surrounded by love. Missing my father's presence more than ever since he passed in March, I linger on this image and I can almost feel his secure embrace.

From Pete's one and only son John, these words represent the sentiments we all shared about Dad:

"Where do I start?

There have been so many thoughts and memories and feelings swirling around inside of each of us, and in stories and conversation between myself and my sisters and Daria, and many of you.

We can easily spend hours and hours telling stories and talking about Pete, with many laughs and many tears, and we will, but I will do my best to sum it up here and now, and try to do justice to the memory of our father Peter Einar Hanssen.

For myself and Liz, Julie, Sarah and Charmaine it is very tough to accept that we will no longer be sitting down at the table with him or chatting on the phone, listening to his calming voice, often in some strange foreign accent or another, entertaining us with his unique perspectives on all that was in his world, and beyond.

We've been talking about all the qualities that endeared him to us, what made him so special, and what he has given each of us to help us get through our own lives.

Peter loved children, and my sisters and I were so lucky that he was our dad.

If I had to find one word to describe what a childhood with Peter as your father was like, the word would be magical. Pure and simple. He was like the Pied Piper and Santa Claus all in one. The thrills we got from being with him and doing whatever it was we did together, no matter what it was, are what fills us today with so many rewarding and satisfying memories.

I look back on what he has given his children, and what he exposed us to and it amazes me as to how many of my own personal treasures I owe to him. From the music of Motown, Aretha, Stax, The Beatles, and Frank Zappa, the humor of Woody Allen, Mel Brooks, Jonathan Winters, Firesign Theater and Monty Python, then there's Sushi, the New York Mets, Beer! It's only now that I realize that so much of what I enjoy today, I can trace back to him. And I know my sisters have similar lists too that all started with Pete.

He lives on in us in so many ways.

Julie and I were recently commenting on where we see Pete in our own children, the next generation of Hanssens. From Jared's goofiness and social abilities, to Emily's sensitivity and compassion, James' loyalty to family. There's Isabel's artistic ability and her love of a good fart joke, and Jesse's devotion to his mother.

Boy did Pete love his mother Jane, and he made sure she was part of everything we did back in the day, Sunday dinners were a Hanssen tradition.

Peter was such a devoted son, brother, uncle, cousin, nephew, father, friend and husband. He taught each of us just how important family is. I see that exhibited now in the life Sarah and her husband John are creating for their own children, Olive, Eden and baby Anchor, even though that's all occurring out in Cleveland of all places!?

For Liz and her children, Anna, Elena, Ben and Sam, Pete's gift of humor and devotion has been played out many times as life has taken many turns. And I thank Elena now for reminding me of one of Pete's great lessons in life, as he would often tell us, "You can pick your friends, and you can pick your nose, but never pick your friends' nose" Though I'm not sure he always followed his own advice on that one. (Many of you here can probably attest to that!)

For Charmaine I can only imagine what it was like for her to have Peter enter her own life at such a young age and provide her with the kind of fatherly love and home life that she deserved. I know how much she loved him, how much he made her laugh, and I’m glad that she got to call him dad too.

Pete loved spending time tracking down distant relatives and records of long forgotten ancestors and the stories their lives told. The family tree he created is extensive and he knew where he fit into it, and he did more than his part to continue to make it thrive.

As much as Pete spread his love throughout this world, there was one part of family life that did seem elusive to him for so many years: finding that right someone to settle down and grow old with (like I have with Jen). Proving that good things do come to those who wait, Peter ultimately found his soulmate in Daria. I know how happy and fulfilled Pete felt to have Daria in his life. She was his 'best friend' he liked to tell me, and they got to experience so many good times and make a wonderful home together, here and in Wallkill. There was no bigger advocate for Pete's well being and welfare than Daria. His children are eternally grateful to her for giving him some of the most rewarding years of his life. He could not have been in better hands.

Pete left his mark wherever he went. From Bay Ridge to Kingsborough, Pine Bush to Highland, Westbeth to DeGraw Street. He made so many friends along the way and sustained those friendships over many many years. Many of you are like family to us, and my sisters and I are thankful that you are part of so many great memories and stories.

Pete was larger than life.

He taught us so much.

He taught us to laugh, to love, to feel, to cry, to live, and to endure.

We are so proud of him, how he never gave up, no matter how many times his body got in the way, his spirit and character stayed strong to the very end.

Pete was inspired by the beauty of the world, and nothing inspired him more than a beautiful sunny morning. 'Top of the morning' was one of his favorite greetings.

Well Pete left us on such a morning,

but he left behind a group of children, and grandchildren, who are forever inspired by him, and will carry on his legacy of laughter and love and family. 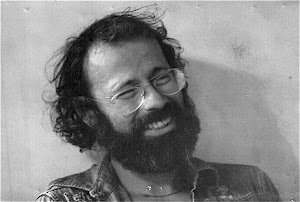 Peter Einar Hanssen, was born in Brooklyn, NY, December 1, 1934 to the late Jane Harding and Einar Hanssen. A graduate of PolyPrep Country Day School and the Pratt Institute, Peter taught painting, drawing, and art history for 35 years at Kingsborough Community College. Peter is survived by his beloved family, including his wife, Daria, and his five children: John, Elizabeth, Juliana, Sarah, and Charmaine, as well as his 12 grandchildren.

Peter loved jazz, baseball, his dogs, Gus and Max, traveling, and gardening. He will be remembered as an amiable and genial man with a unique sense of humor and wit that made us all laugh. Peter was loved, respected, and admired by all those who knew him.

Sarah
mother, daughter, artist, professional,
and not always in that order